I wrote about spaced repetition systems (an approach to better learning and memory) recently, and in there was a brief section about Anki. I wanted to expand upon that and provide a guide on how to setup and use Anki, and provide a couple of tips and tricks as well.

Getting started is super simple, go to https://apps.ankiweb.net and follow the steps to download and install it on your (mac, linux, or windows) computer.

Once you have it installed, open it up and follow the steps to select a language. Once that is done you will be presented with a screen similar to this one, although the name of the deck might be Default. You can rename this if you want, but it isn't necessary. With that, you are all setup! 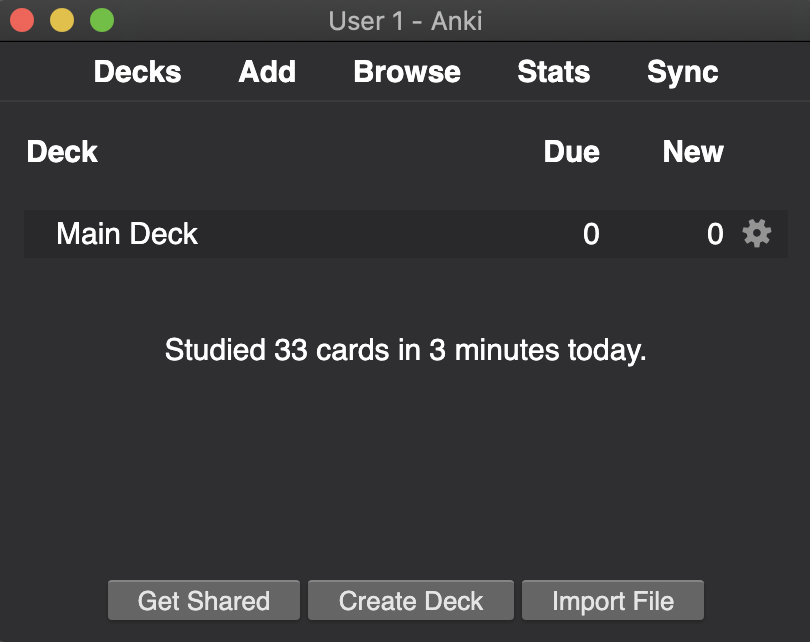 Organizing cards (and why you shouldn't)

In this guide I'm demonstrating a super simple single deck workflow, and not because I'm lazy, but because I think it is the best way to go and this is the system I'm using. It is possible to organize your cards into a variety of different decks based on topic and subject matter, but there are a couple of advantages to keeping everything into a single deck.

First of all, simplicity is valuable. Using Anki is something that should begin to become a habit, and when trying to establish a new habit, you want to minimize the number of barriers to pass and decisions to make when executing on that habit. If you have to figure out which deck to add to when creating cards, and which deck to review when doing your reviews, even that little bit of extra friction can make all the difference.

Secondly, you should be reviewing all of your cards regularly, and having the choice between decks makes it easier to skip ones you aren't feeling at the moment, and can lead to bad habits. And it makes it harder to manage the reviews because you can't just click one button and review until done.

And finally, by having everything in the same deck, it works the brain more and builds different connections going between different topics. There is the chance that jumping from a historical fact into a statistical question might lead to some interesting links that would otherwise not be made.

The one situation where I would recommend having a separate deck is if you decide to pull in community made cards. There are great collections out there for everything from medical students to language learners, but if you decide to pull those in, put it in a separate deck. It is possible you will only find out after the fact that the cards aren't quite what you need or are ready for, or there are simply too many, and by putting them into your main deck you run this risk of polluting the whole thing.

Although Anki supports a variety of different card types, and even allows you to create your own, but in the beginning I would recommend focusing on just two, for the sake of simplicity and consistency.

The first type will probably make up ~90% of the cards you create. It is just the 'Basic' type, the default one that is selected the first time you click the Add button to create a card. It is incredibly simple, has a field for the front of the card to put a question or prompt, and a field for the back to put an answer. 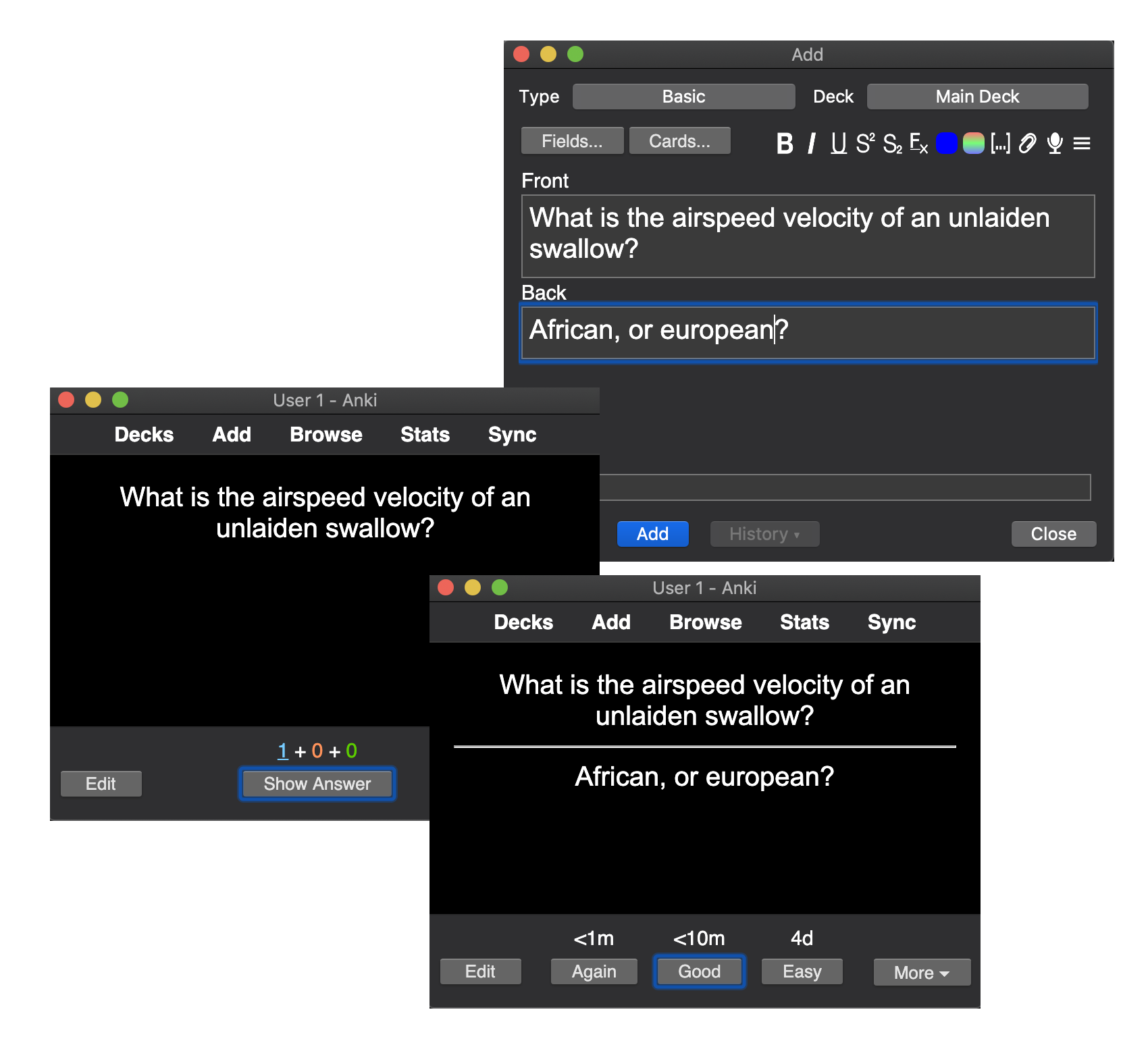 example of creating and reviewing a Basic card

The second type is the 'Cloze' cards (based on the Cloze test). These are essentially just fill in the blank cards. Rather than having a field for the front and the back, instead there is just a single field for the text. In this field you will write out a statement (e.g. In 1492 Christopher Columbus landed in the Caribbean), and then highlighting sections of it, clicking the [...] button to turn them into clozes. Then when you hit 'Add', Anki will create a card variant with each of the clozes blanked out to fill in (so for that last example, you could add a cloze around 1492, Christopher Columbus, and Caribbean, and Anki would create three separate cards asking to fill in each of those). 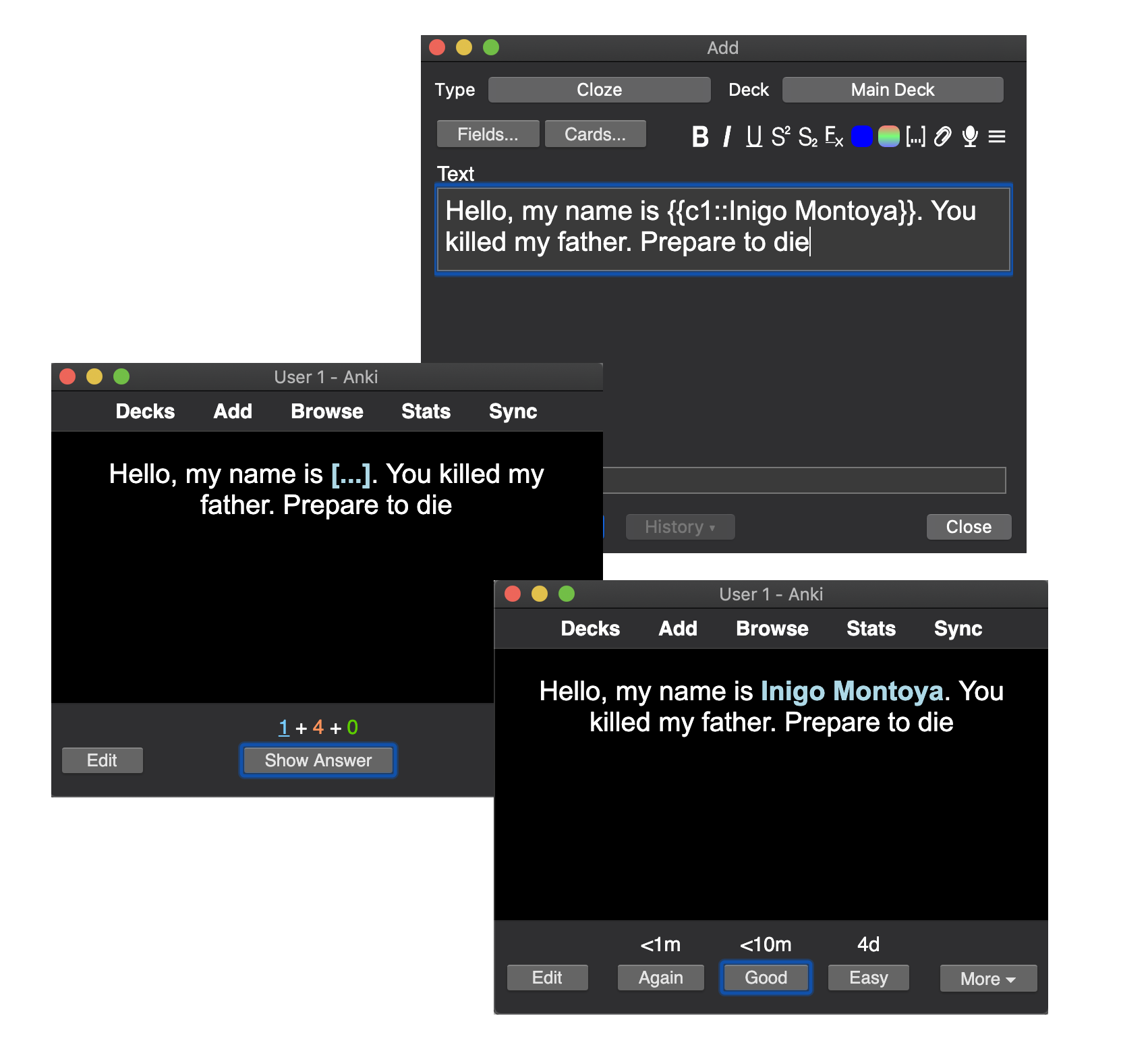 example of creating and reviewing a Cloze card

Avoid pulling in too many of your cards from other people's decks. There is a lot of value in writing the questions and answers yourself, it forces you to frame an idea in your own words, and those words are then something that will resonate more strongly with you when reviewing later.

Try and complete a review every day. This is a system designed around well spaced reps, and if you skip too frequently it won't have as good of an effect. Plus, if you don't, eventually the backlog will start to build up and it will become harder and harder to get caught back up. If this happens to you, don't worry, just go into the settings and adjust the number of reviews per day until you are caught up (gear icon next to deck -> Reviews -> Maximum reviews/day).

Figure out triggers for yourself to remember to capture things into Anki. This is something I'm definitely struggling with still, but one approach I'm taking is when I'm done reading and taking notes on an article, I will go back over my notes and try to think of anything worth explicitly remembering.

Anki is also available for your phone, which can make it much easier to capture on the go and review in short bursts when you have time but don't have your laptop. There are two separate apps, there is the paid AnkiMobile app for iOS and AnkiDroid for Android.

Again, both should be pretty easy to setup, the main thing you will need to do is make sure to have an account setup at https://ankiweb.net/. Once you have that, you can login on your computer and phone, and keep the cards and review status in sync.

The same recommendations as above apply to mobile as well when creating and reviewing. 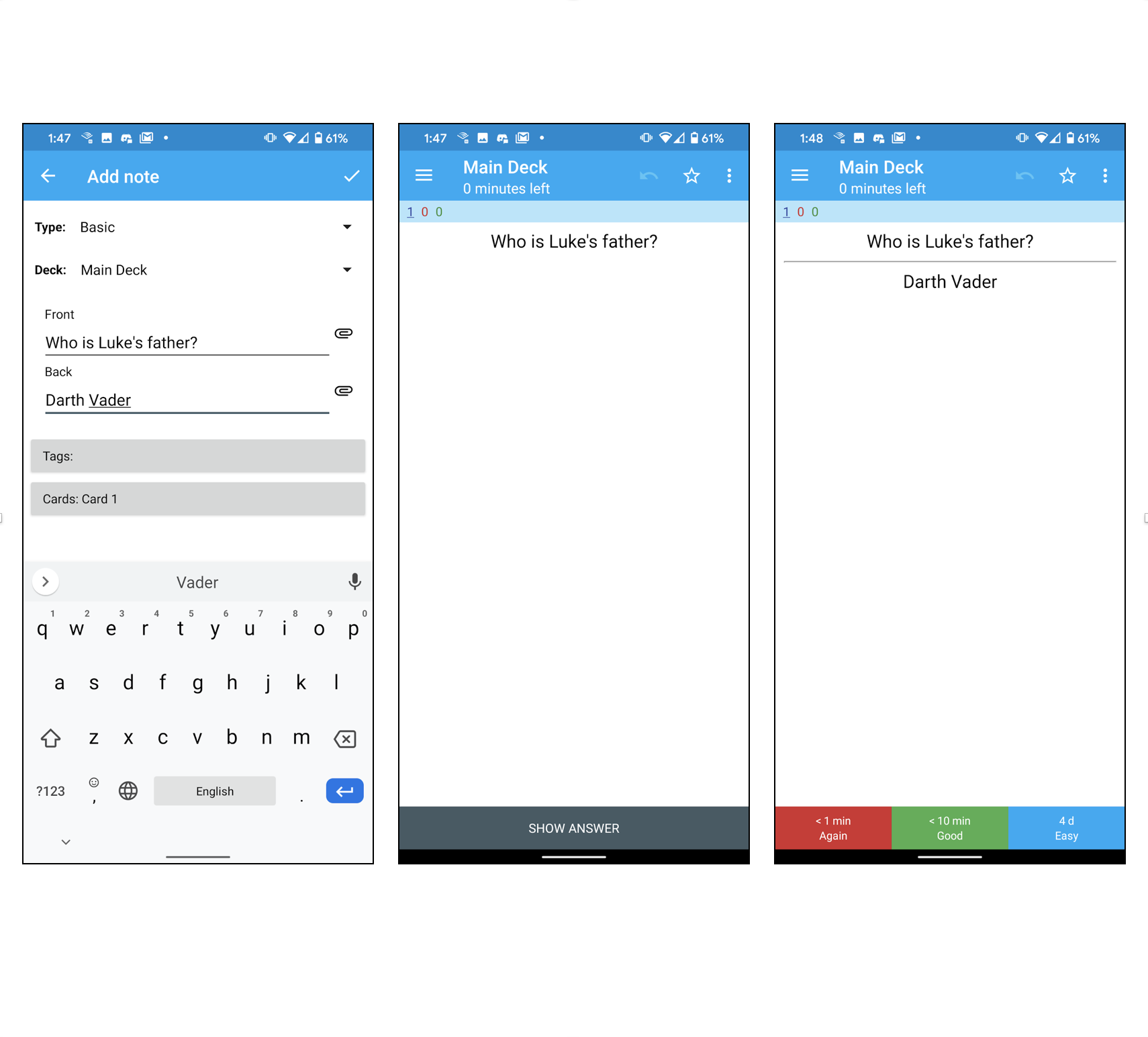 If you enjoyed this post, consider signing up for my newsletter. Every week The Wednesday Writeup will come to you with an update on what I have been working on and thinking about, as well as recommendations for things to read and watch. You can check out the backlog and sign up at aengus.substack.com.

I don't have comments on this site, but I would also greatly appreciate any feedback via Twitter or Email.