I would take a bet that every single one of you reading this post right now has at least a handful of new things that you are trying to learn. And whether practicing new skills or studying concepts, a significant part of the process will require applying memory.

In my own experiences learning to play ukulele I have to remember chord positions and how to play different songs, learning Spanish requires memorization of grammar and vocabulary, even mastering more conceptual skills like writing or entrepreneurship demands the internalizing of learnings and ideas.

There are a countless number of different approaches to improving memory and learning that have been developed, but my favorite, and the one that I believe has the most potential, is spaced repetition.

What is Spaced Repetition?

Spaced repetition is a system, generally based around flashcards or a digital equivalent, for learning and memorizing information. It applies an algorithmic approach to learning and reinforcing concepts. At a high level, what the algorithm does is it shows newer and more difficult concepts more frequently, and easier and more well understood concepts less so. This means that the system ensures you spend more time practicing the things that you still need to work on, and doesn't waste time on the things you don't. Makes sense right?

SRS was first formally tested by Thomas Laundauer and Robert Bjork in 1978. A test, run with a group of psychology students, showed that the students had better face-name association after applying spaced repetition. Since then, the technique has been researched heavily for use by Alzheimer's patients and has proved helpful for people with amnesia and other memory diseases. It has also been built out into several physical and digital algorithms and tools, and incorporated into numerous educational approaches over the years.

The most popular physical approach was developed by Sebastian Leitner, the Leitner system. You have several different boxes of flashcards to study, each with a successively longer practice interval. Whenever you successfully answer a flash card you move it to the next box in the line, and whenever you answer incorrectly, you move it to the first box. This is a brute force approach that implements the SRS algorithm in a basic but physical way.

So, for example, if you were trying to memorize the capital of Iowa, you would create a card for "What is the capital of Iowa?", with "Des Moines" on the back, and start it in the first box. Then, every day you would try to answer that question. If you answer incorrectly, you would put it back in the box, but if you succeed, you would move it to the second box. Then you wouldn't revisit it for another two days, and if you succeed you move it to the third box and don't try again for another three days. And at any point if you answer something other than Des Moines, you move the card back to the front of the box and restart the process. Voila, memory training with physical flashcards!

There are also quite a few digital systems with similar functions. The most popular is Anki. It does a very similar process but hides the boxes and just delivers you cards that you need to study. Because it is digital there is a community that has been built up around sharing card decks, so you can go in and find a deck for Spanish vocabulary, state capitals, or just about anything else you might want to memorize. And the great part about Anki is that, unlike the Leitner system, it can adapt the interval of study for each card individually depending on the configured settings, difficulty of the card, and how easy it was to get the right answer. This means it can create a custom tailored study session every single day for all of the information you need to work on. 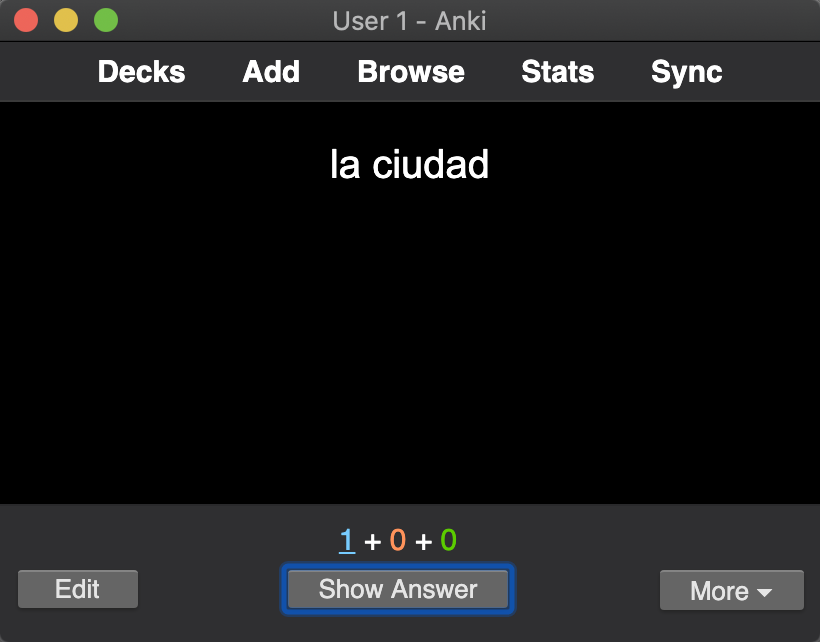 Card to try and answer 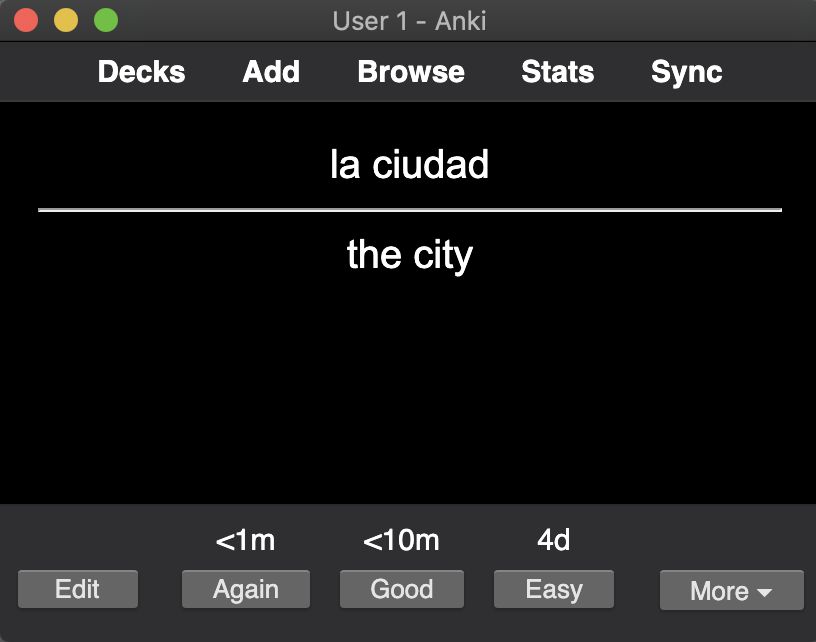 Now that you know what SRS is, what could you apply it to? Well, pretty much anything that requires memorizing things or building a deep ingrained understanding of a topic. People apply spaced repetition systems for practicing basic trivia and factoids, learning new languages, studying for exams in college, and for testing understanding of complex topics.

Recently I read an article How to Make Yourself Into a Learning Machine, interviewing Simon Eskildsen about how he learns. Part of his system involves saving tons of information into Anki and using spaced repetition to memorize it all. At this point he has over 10k notes, containing lots of random tidbits of information. There is a section of the post that I really like for why this sort of memory training is important:

"I think memory is underrated. For example, memorizing all of the U.S. presidents is something that people might think is for show. But to me it’s actually really helpful to know who was president at a certain time because it allows you to connect the president with that time period. For example, take Reagan. If you know when he was president, you can say, Okay this was around the Cold War and it was towards the end of it, and his platform supported trickle down economics which was a very important idea in that time period. Memorizing these things means that if you’re talking about the U.S. in the 80s, you’ll remember that he was president, and all of those concepts come up."

It really captures the value of this sort of system (and convinces me that I need to step up my own SRS system). This sort of memorization can improve the way you think about the world, and give you ammunition to communicate and discuss topics more effectively. It can expand your world in interesting ways.

Personally, I am still exploring how I most want to use SRS, but I do use it heavily for language learning. I started using Duolingo again near the beginning of the year, and spent about a month and a half re-learning Spanish before visiting South America. The regular reinforcement of terminology, phrases, and grammar from daily use and repetition helped a ton, and although I had taken a few semesters of Spanish in the past, just a few weeks of consistent spaced repetition did far more to help than those classes did.

There are a couple of seemingly untapped opportunities in the realm of spaced repetition that I haven't seen explored. I believe that there are ways to expand SR systems beyond how they have been used, either with different technologies, strategies, or educational approaches. In doing so the educational landscape could be changed significantly in several different fields.

The main area that I don't see SRS applied is in muscle memory based practice. There are lots of different ways that music is taught, and obviously repetition is a big part of practice (e.g. practicing scales), but actually spacing out the repetition in an algorithmic way and having a system for figuring out what you should be practicing on a given day? As far as I know it hasn't been done. There are definitely some tricky aspects of this, for one thing, muscle memory behaves differently than normal memory, and there are ways the system may need to be adjusted to accommodate that. Plus, determining a 'successful answer' is more complicated with things like music practice. You might be hitting the right notes but not hitting them cleanly or consistently. This system would likely require some self evaluation and the ability to be a little more subtle with the corrections. Definitely not easy problems, but I think if they could be solved this could really change the way people approach music education.

I would also be interested to explore ways in which project focused learning could be combined with SRS. Spaced repetition works great for lots of smaller discrete elements, but I haven't seen it integrated alongside larger practice projects. For example, how could one approach using an SRS based program for teaching software development or writing, areas where applied project based practice is key?

Hopefully by now you are convinced to start building out a spaced repetition system for yourself. Start using Duolingo to learn a new language, begin building up a deck of interesting facts in Anki, or get yourself a bunch of flashcards and a couple of boxes if you want to be a bit more tactile with it. Try it for a while and see how it helps, it may change the way you view and interact with the world.

And one more thing, if you find other interesting approaches/tools to SRS, or find ways that it helps you, tweet me at @aengusmcmillin, I would be very interested to hear about it!